“Mind the gap” says the rather disconnected voice over the PA system which announces the arrival of a draft of icy cold air as the automatic doors of the under ground train swoosh open, which is quite welcome as the press of bodies on this Piccadilly line to Heathrow is making the atmosphere rather claustrophobic.  I also think the fact that all the passengers are wearing thick winter coats, scarves and woollen beanies, a necessity in the middle of a UK winter, adds to the thickness of the air.

As a South African, the idea of hopping on and off these spaghetti junction trains to get to your destination is still a novelty, and realise that for those that this pastime forms the drudgery of their daily lives, it would be hard to find any joy in the activity.

One thing I have noticed and read about is the noticeable lack of eye contact.  It seems that no one dares make eye contact. If by chance, god forbid, your eyes meet, the immediate eye movement in the opposite direction would alarm many an optometrist.

I find myself reading and rereading the adverts just above my fellow passengers heads, or watching the electronic notice board advising of which station will be next. Or looking down at the feet across directly across from me.  This I decided was the best way to pass the time, to examine the footwear of the people who are my companions for the next whole and try and analyse who they are and what their lives might be like, just from viewing them from the knees down.

To my right, enter female, alone, older, I can tell this by the liver spots on her legs as she is only one in my line of vision wearing a skirt.  It is a tiered rather dated denim skirt which comes down to mid calf length.  She is wearing scuffed red “takkies”. I look up and see she is holding onto her handbag very tightly and her other hand is white knuckled around her suitcase (she is going to Heathrow).  She is also wearing a scarf festooned with giraffes. I decided she is travelling to South Africa for a safari and it is her first time travelling solo, wants to be comfortable walking around hence the shoes that really did not go with her outfit.

To her left are two pairs of shiny metal toed, pointy black boots.  One male and one female. Twins? No just a fashionista couple off maybe for a European trip as they also had matching Louis Vuitton bags. I could take a closer look at them as they were both totally engrossed in their electronic devices.

Quite new hiking boots are next in my peripheral vision. Dark grey chinos, well worn and a little creased, and a walking stick.  An older gentleman, who had sat down rather quickly and inelegantly when the train moved away while he was still making his way to the vacant seat. Out of this ordinariness, one feature stood out and that was the ring on his middle finger, was large and silver with some kind of Nordic god engraved on it.  I did glance up and saw that he sported a large Father Christmas beard – maybe he was travelling on the underground in disguise in a hurry to get back to the North Pole. 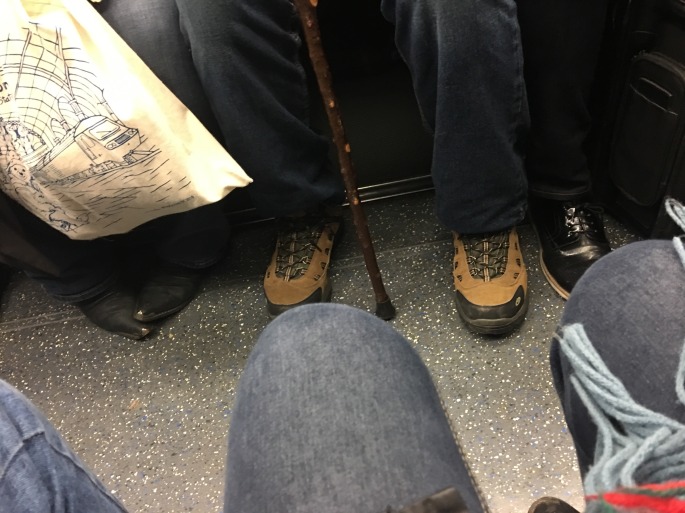 It was the flash of a silver hello kitty wheelie bag that next caught my attention, with the requisite sparkling white platform heeled converse takkies, skinny jeans.  A young Chinese girl returning home.

My own little personal pass the time game was then interrupted with that detached “Mind the Gap – the next station is terminal 2 and 3.” Time to return to my own life story.